skip to main | skip to sidebar

A night in Sounio 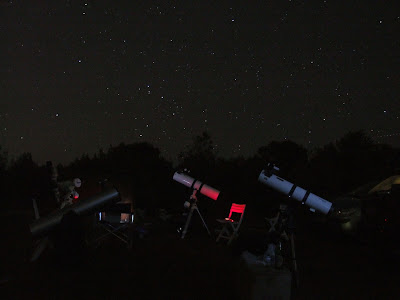 At Saturday February 28 we went to the Sounio area in Attica, in the region north of the temple of Poseidon. The sky there is good considering it's close to Athens. Maybe around 5.5 mag when looking east and at zenith. We were around 10 people, with 6 scopes. It was the official first light for my 6" f5 refractor.

Oh boy! I had some concerns about colour for this scope, but with a William Optics VR-1 filter the colour is little on the very bright stars. I acquired this scope simply for the widefield views, deep sky views in general, and portability. So i knew that it wouldnt do that good in planteray observation. Nevertheless with the filter and by putting the aperture stop on it making it 115mm and f6.5, i could see Saturn almost without any colour abberation. The view was sharp up until 120X. I didnt have a smaller eyepiece with me to try higher mags.

On deep sky the scope rocks! I thought that with the 6 inches of aperture i wouldn't be able to see the popular galaxies that good, but, oh boy, Leo triplet, M81 and M82, the Sombrero, M51 and other galaxies were there clearly visible without averted vision and with detail to be seen. It seems that a 6 inch refractor is actually like a 7 inch Newtonian, due to the lack of central obstruction, and due to the refrctor contrast, it delivers very nice views in many targets. The Double Cluster was glorious, and you could see the stars at M13 even at a lower magnification. The eyepieces that i used were a 13mm Nagler and an 20mm WO swa, and a 2x Televue barlow. Even though the Nagler is a fine eyepiece, i mostly used the 20 swa because it gave brighter views at most objects. I used the barlow with the Nagler at M13 to see if i could reslove the vore, and even though you could see the individual stars, the image wasnt that good at that magnification. It was far more better in the 8 inch Orion Optics Newtonian of a friend of mine, where the stars were resolved more easily at this mag. But hey, i expected that an f5 refractor wouldn't be able to show very good views in high magnifications, mainly due to the chromatic and spherical aberration. But in lower magnifications the views were outstanding.

All in all, we had a very nice night under the stars, and it was almost 3 months since we had a chance for a star party under a crystal clear sky, due to the weather.

After 3 days we went back there with a friend of mine, but the conditions were not good for observing. Although the sky cleared after the moon set, the humidity was high. We had to clean our eyepieces every half a minute or so. I was able though to look through a 32mm eyepiece in my scope. Very nice views. I hadn't taken the EQ6 with me, so i was searching the targets the old fashoned way, with the refractor on a Vixen porta alt az mount. So the 32mm eyepiece was very nice as a finder, and gave stunning views of large objects, like open clusters. :)
Posted by Stathis at 12:24 AM